Do mistletoes show cryptic mimicry of their hosts?

A feature of many Australian loranth mistletoes is their apparent close vegetative similarity to their usual hosts. In fact, this feature seems to be more frequent in Australia than anywhere else. In Australia the phenomenon includes the most common host genera, including Eucalyptus, Acacia, Casuarina/Allocasuarina, Melaleuca, mangroves (Rhizophora) and Atalaya, and several mistletoe genera, including Amyema, Lysiana, Muellerina, Diplatia and Dendrophthoe. It occurs in virtually all open woodland associations in Australia. Host-parasite resemblance therefore appears to have been established independently many times, and may be an important evolutionary feature in Australian mistletoes.

The resemblance between host and parasite is mainly in the shape, size and presentation of the leaves. Host-mistletoe combinations with linear, compressed or needle-like leaves are best developed on Casuarina and Allocasuarina, but also occur on narrow-leaved species of Acacia, Eremophila, Grevillea and Hakea. A remarkable example is Amyema cambagei, which is mostly found on river oak Casuarina cunninghamiana, and forest oak Allocasuarina torulosa, and unless the mistletoe is in flower and fruit is difficult to distinguish from the host (below). 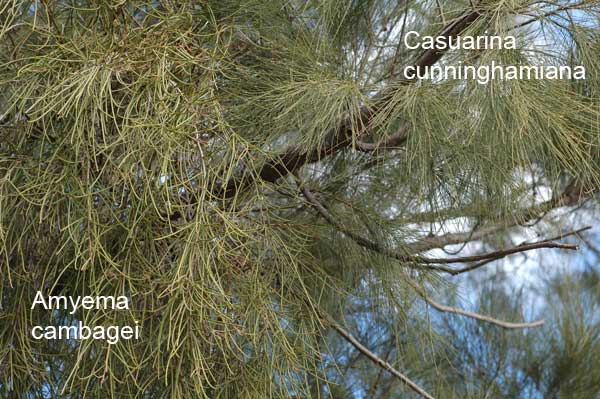 Host-mistletoe combinations with flat, more or less lanceolate, often falcate leaves are common in Eucalyptus and Acacia. Being the largest and most widespread genera in Australia, both are host to many mimicking mistletoes (below left).

Perhaps the most extraordinary example of host resemblance is Dendrophthoe homoplastica, which grows on eucalypts, but is common on Eucalyptus shirleyi. This eucalypt is one of those neotenic species in which the rounded-oval, heart-shaped, stem-claspng juvenile leaves are retained as the mature leaf form of the tree. The mistletoe mimicks the neotenic leaves of the host very closely (above right).

. They have round, fleshy leaves, and blend against the background of mangrove foliage.

Is this apparent resemblance real? Is it an evolutionary consequence of natural selection?