In the Loranthaceae there are many morphological, systematic and karyological (i.e., structural, classificatory and chromosomal) characters which allow us to predict a phylogeny (evolutionary history) with some confidence. In recent years studies of DNA sequences in loranths have tended to confirm this postulated phylogeny. Because dispersibility of loranths is low, their strongly continental distribution allows high confidence in the correlation of phylogeny and migration. Accordingly, the loranths have been revealed as a classic southern plant family, with a history bound up in the history of Gondwana.

The karyology of the family is a good indicator of geographic history. There is striking stability in chromosomal constitution in the family, and chromosome numbers and their geography are good indicators of history. The primary basic chromosome number is x = 12, and the other basic numbers of x = 11, 10, 9 and 8 indicate progressive stepwise reduction from the primary basic number. Particular numbers are constant for entire tribes or other suites of related genera.

The geography of these basic numbers can be described in the context of the world distribution of Loranthaceae: 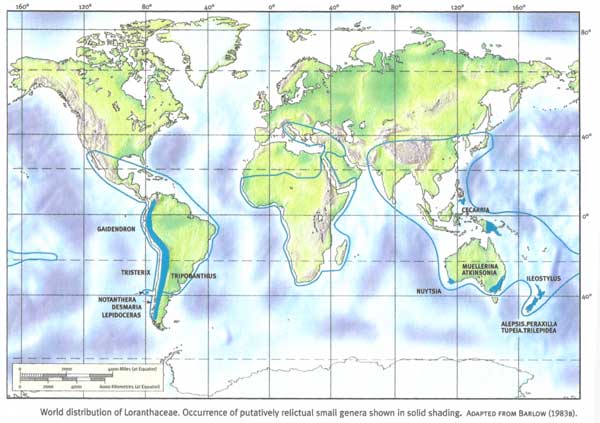 The primary basic number x = 12 is represented in both the Old and New Worlds. In South America it occurs in three small, essentially temperate genera, Gaiadendron, Notanthera and Tristerix. In the Old World x = 12 occurs in the five small or monotypic genera Alepis, Peraxilla and Tupeia in New Zealand and Nuytsia and Atkinsonia in temperate Australia. All of these genera show a number of primitive vegetative and floral characters, and appear to be relictual. The number x = 12 is also distributed from Australia to Southeast Asia in the several larger, more specialized but fundamentally primitive genera of tribe Elytrantheae.

The basic number x = 11 occurs in the relict monotypic genus Ileostylus in New Zealand and Norfolk Island, and probably also in the small, related Chilean genus Lepidoceras. It also occurs in the small, primitive, temperate genus Muellerina in Australia. The number x = 10 is known only in the monotypic genus Ligaria of temperate South America. The basic numbers x = 11 and 10 thus appear to be south temperate and relictual in their distribution.

The number x = 9 is characteristic of all the remaining, derived and advanced genera of the Old World, from Australia to Asia and Africa (tribe Lorantheae). Similarly, all of the remaining genera of the New World characteristically have x = 8, including the large, advanced tropical genera of tribe Struthantheae. The pattern which emerges is therefore one in which an ancestral stock with x = 12 was widespread in the southern lands, and in which stepwise reduction to x = 9 and 8 has preceded massive evolutionary radiation of the family in the tropics. That this radiation has been independent in the Old and New Worlds is indicated by the fact that the derived stocks, with x = 9 and 8 respectively, have closer affinities with the old southern groups than with each other. A limited independent radiation in the Indomalayan region of the Old World has apparently occurred in a stock which has retained the number x = 12.

This pattern illustrates the position of the Loranthaceae as part of the ‘paleoaustral’ element of the world flora (below, chromosome numbers shown). Even though the mistletoes are highly specialized in terms of life form, they must have had a long history in the southern lands. Their present distribution is consistent with their existence as part of the Gondwanan flora prior to fragmentation of the southern supercontinent in the Cretaceous period. The predominantly tropical nature of their present geographical and taxonomic distribution reflects the evolutionary responses which have followed the displacement and isolation of the southern continental plates.

The picture of the biogeographic history of the loranths which therefore emerges is as follows. The first loranths were terrestrial root-parasitic trees and shrubs in warm to cool temperate closed forests of Gondwanaland. Since water availability in such habitats may not have been limiting, parasitism may have been an advantage for mineral nutrition in deficient soils. Subsequent development led to the evolution of stem-parasitism, and loranth mistletoes presumably existed in the various southern lands before they rifted and separated. A few relicts of these ancient stocks still persist in Australia, New Zealand and southern South America, now widely disjunct but showing the evidence of their common history.

Climatic changes in the southern lands were due at least in part to the physical effects of the rifting of Gondwana itself. These changes led to massive new evolutionary radiations in the loranths, especially to their diversification in the tropics. Because of the geographic isolation of Africa, Australia and South America, independent lines of evolution were established in these regions. Loranths have achieved their present distributions almost exclusively by gradual expansion over more or less continual land, extending from Asia to Europe and through Africa in the Old World, and reaching northern Mexico in the New World. The abundance of these mistletoes in the tropics hides a shadowy past in the Cretaceous Gondwana.